What you (probably) don’t know about The CatCade 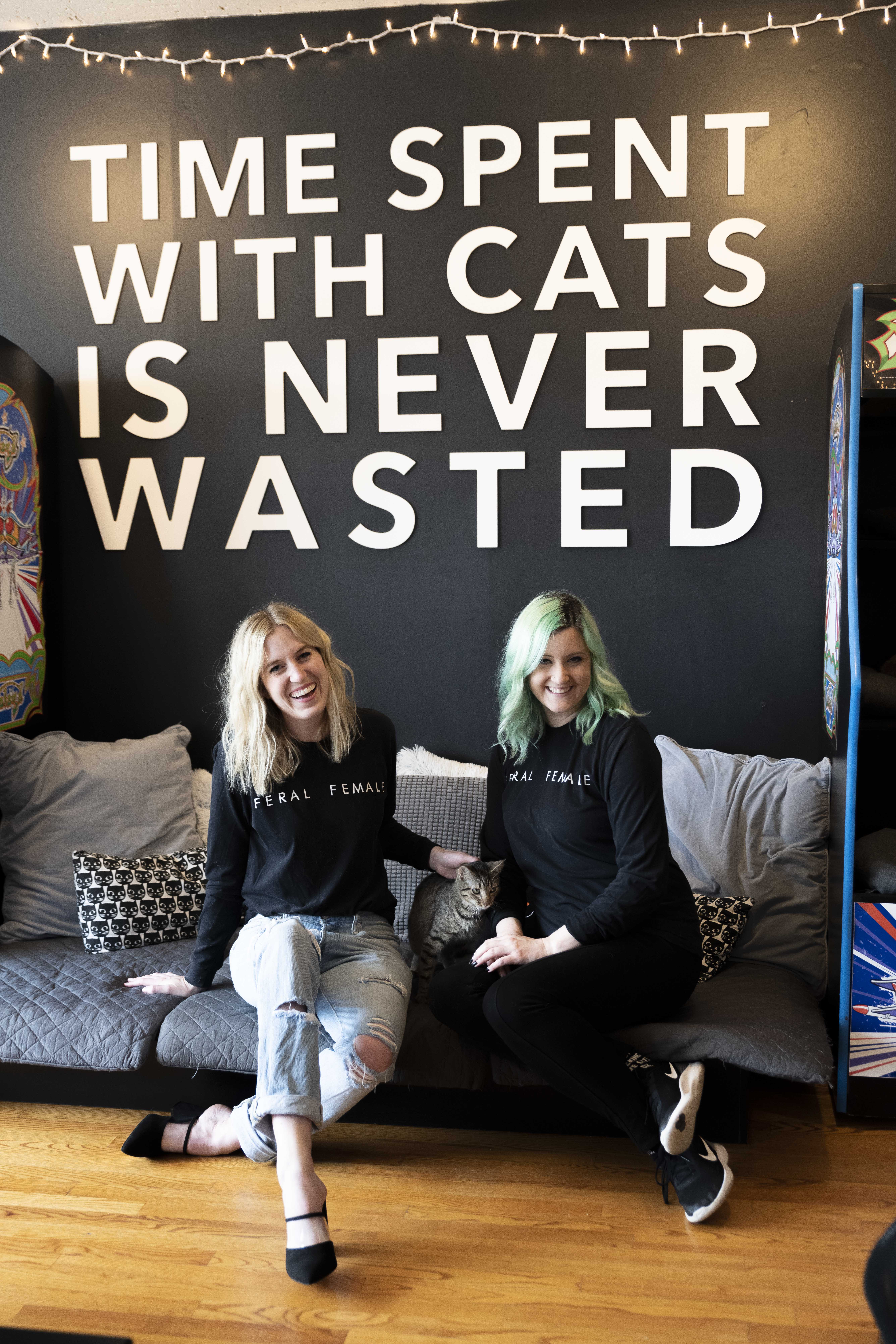 My life has revolved around cats these past few days. The mom and her litter are doing well but we had a little scare on Friday. Luckily everyone seems to be doing better but kittens are so fragile so it’s a constant battle keeping everyone healthy. Not only do I have (a zillion) cats in my home, but I got to stop by my favorite cat rescue, the CatCade this past Friday.

Yes, The Cat Cade is a cat rescue, not simply a cat café. In the world of cat cafes, this is incredibly rare. So rare in fact that The CatCade is one of the ten cat cafés in the nation that run completely as a nonprofit. There are more than 80 in the country so it’s pretty damn impressive. Many cat cafes are for-profit businesses that partner with a rescue to bring cats into the café. It may seem like a subtle difference, but the operations vary greatly.

I was recently listening to the Catty Corner podcast which recently featured CatCade founders Chris and Shelly. On the episode, they’re asked why they decided to open as a nonprofit vs. the typical for-profit model. Their response actually surprised me. Basically, they wanted to be responsible for all aspects of the café. They didn’t want to just be a space for a rescue to use, they wanted to be a rescue themselves. Just like other rescue organizations, Chris and Shelly choose the cats that they bring in, make medical decisions, approve the adopters, and everything else that comes with running a rescue. 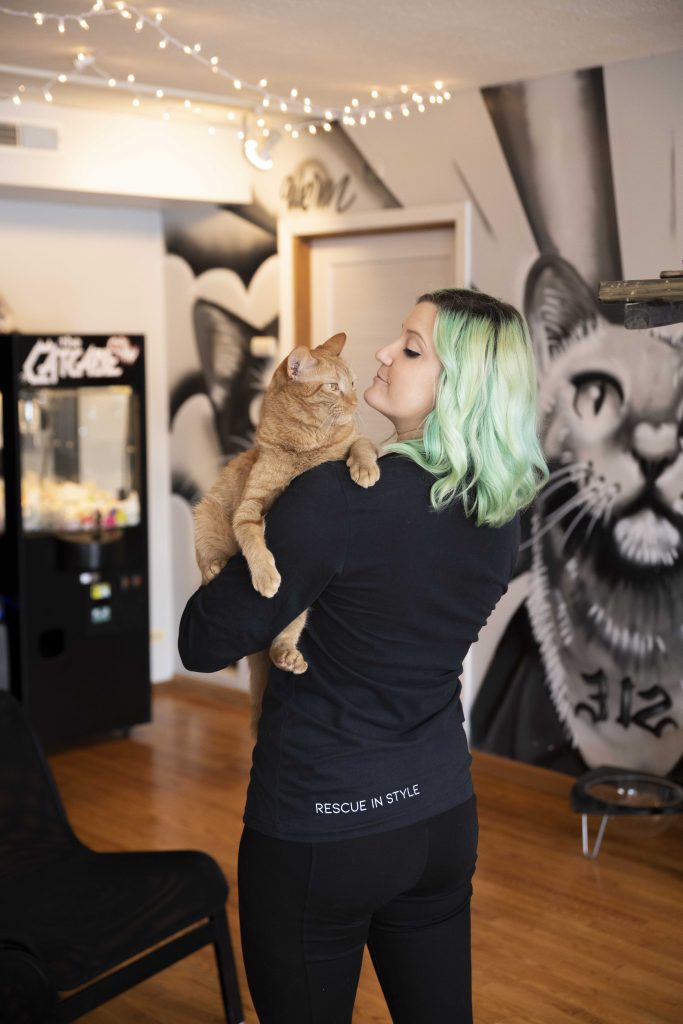 People somehow are confused by this because it’s not your traditional rescue. Shelly and Chris didn’t want to open a conventional cat rescue, they wanted to create an environment where both cats and people could thrive. I mean, what better way to get to know a cat than to interact with it in a home setting? And where else would you rather adopt than a welcoming, friendly environment filled with video games and awesome cats?

Their concept is not only working, it’s thriving. In just under two years, they’ve adopted out almost 650 cats. That’s a lot of freaking cats. I’ve written about why I admire them previously but I really am proud and humbled to call Chris and Shelly my friends.

While 650 cats is really awesome, it’s also really expensive. So, I am thrilled to (finally) show off my Feral Female shirt that supports The CatCade. This long-sleeve black tee is perhaps my most comfortable yet. I have been patiently waiting to wear it since I brought them home from Victory Screen Printing (shout out to Clint who adopted a dog from CACC). 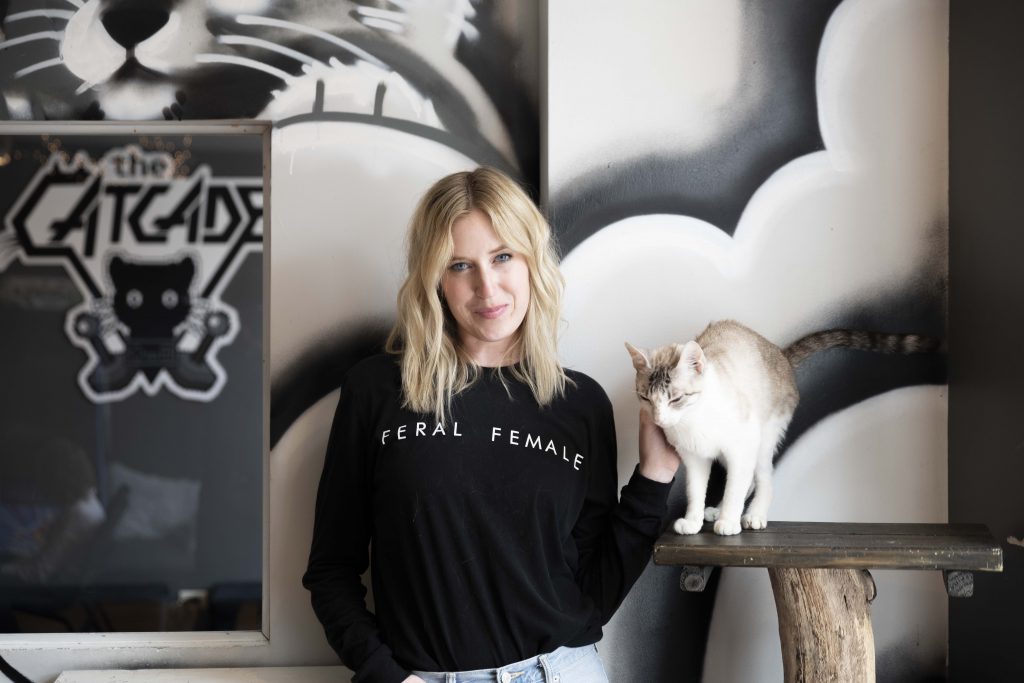 You can purchase this tee at The CatCade starting meow! Currently we are not shipping them out, so go pick one up asap because I know they’ll sell out. If you really want one, send me an email and if we get enough interest, I’ll do another run of them. In the meantime, check out the rest of the Feral Female collection here.

Thank you, Shelly and Chris, for collaborating with me on this and for all you do for cats everywhere.

The CatCade always has about 20 cats in their care, all (except Leo!) available for adoption. This is Mink and she’s the prettiest girl. She’s still a little shy but I was able to coax a few head nuzzles out of her. You can meet her yourself when you pick up a shirt from the Cade!