To be honest, this week has been… meh. I felt like I was stuck in mud and wasn’t at my most productive. It was like I was doing so much but accomplishing so little if that makes sense? I think part of that is this last little kitten that hasn’t found a home yet. With three kittens and a dog, our house is… full.

Little Apricot has been a fun temporary addition to our little family. Of course, we love every foster, but Apricot is the first kitten we’ve ever integrated with our family. Normally, we keep the kittens separate from our cats to ensure no germs are passed from one to the other. However, when all his siblings but he were adopted, we couldn’t sequester the little dude by himself. He was so sad to be left alone and would howl in the bathroom for a while.

Apricot was always the least confident of the litter. When we first brought them into our home, he was terrified of being held or touched. Once, he quite literally launched himself out of my husband’s arms six feet across the room to get away. He would hide when we came into the room and dart away at any sort of loud noises.

Part of the reason he was this way is that he came from a hoarding situation. He wasn’t ever touched by people before so he was terrified of it when we first tried. So, yet a new thing to learn for both Apricot and myself, we began socializing him. I’d sit in the bathroom with him for hours, letting him smell and explore and learn that I wasn’t all that bad.

Eventually, Apricot became the best snuggler of the group. He began insisting on belly rubs and head boops. He fell asleep on my lap and I lost feeling in my feet for an hour because I didn’t want to move.

When his siblings left, we knew he needed to continue to build up confidence and social skills. Introducing him to Roni and Cheese proved to be difficult as our resident kitties decided that they would not be rolling out the red carpet. He was met with lots of hissing and growling and a few swats from Cheese. Poor Apricot would get the clue and dart away.

After consulting with my friend and cat behaviorist, Ro Delrose, we learned how to introduce them in a more positive manner. Now, two and a half weeks later, we’re all living in (mostly) harmony. Apricot lets me hold him, still falls asleep on my lap, insists on belly rubs, and only occasionally hisses at Rawlings.

This is one of the best parts of fostering. Seeing their growth, overcoming their fears, and helping them become their best selves is what makes fostering such an incredible experience. I’ve seen a senior dog learn how to play with a toy. I’ve helped a mama cat recover from an illness while syringe feeding her kittens. Who could forget watching Endora feel the comfort of a dog bed for the first time in her cruel life?

I didn’t think a human heart could expand but after fostering countless animals, I’m convinced my heart has grown immensely. Watching them grow is by far one of the most rewarding parts of fostering. You can’t help but take a little pride when they take little steps towards becoming happy healthy animals.

It’s going to be extremely difficult to say goodbye to Little Apricot, but I know his perfect family is out there. I know they’ll love him and he’ll continue to flourish with them. I’ll just be grateful I got to be a part of his journey. 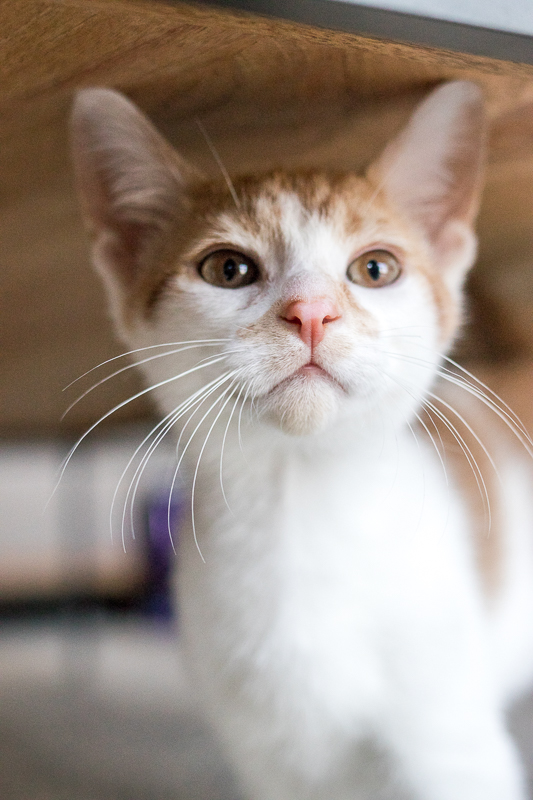 Apricot – I think I’ve talked enough about this boy, but he’s a total gem. He’s available for adoption through Lulu’s Locker Rescue.

While in Houston, I stopped by a local boutique called Emerson Rose. I scooped up this outfit. Linked similar items below!