Hello from Wisconsin! Getting a bit of a late start with this one because it’s been a nonstop party. Enjoying the time with my family and celebrating a new chapter in our lives. Today’s Rescue Confessions is all about a family. I’m going to keep this intro short because Ashley has so much great advice and her story is so wonderful.

Ashley and I met through my college roommate and her and I have always bonded over our mutual love for animals. She recently started fostering through Best Friends Animal Society in Utah and I’ve been loving her updates. So without further ado, let’s meet her and her three puppers! 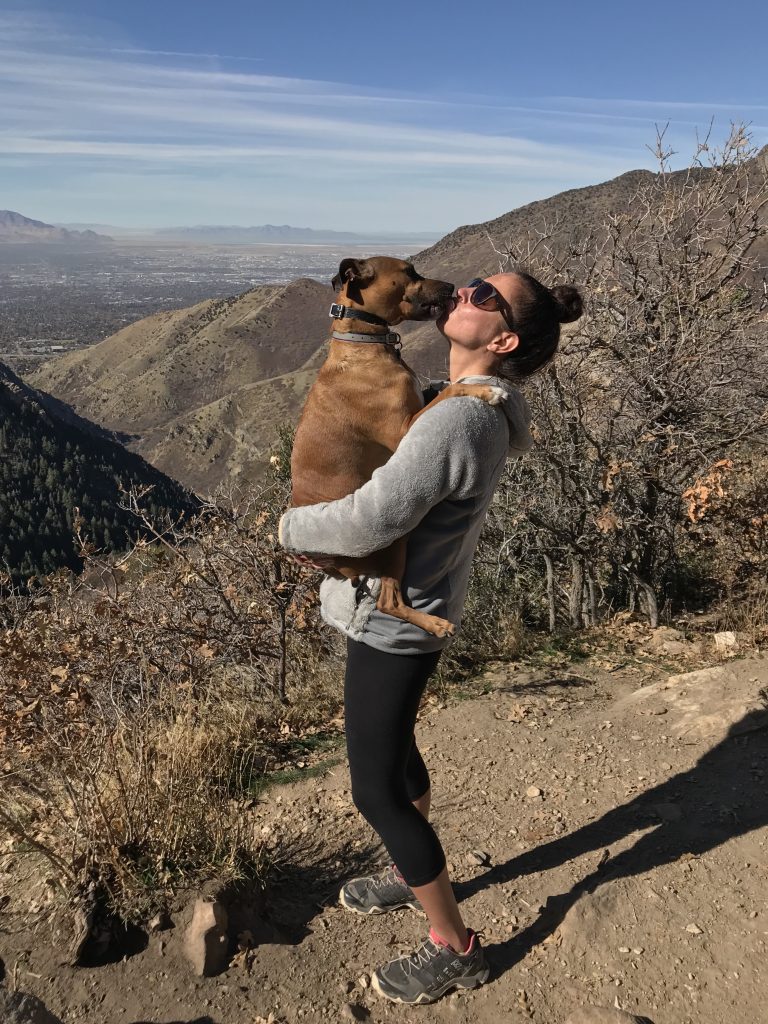 Nikita: Nikita is our eight-year-old Siberian Husky and our Daddy’s girl. Well, we are fairly confident she is a Siberian Husky, anyways. Despite her striking resemblance to the breed, she is completely mute (unless she wants food or you to get out of bed, in which case it is a single startling bark), so we do sometimes wonder… She also goes by Niki, Nicolette, Big Bits, Hungry Hungry Husky, and Baby Girl.

Bert: Bertie is my baby and our six-year-old mutt. Most commonly known as Bert McGert, but also referred to as: LB, Booch, Boocharoon, Choon Nugget, Chicharron, and… Pasta Primavera. They listed him as a Boxer/Lab mix. We think he may have a little boxer in him, but for the most part, we don’t really (nor does his vet) think he is either of those breeds. Every person we encounter with a dog that looks just like him also has absolutely no idea what their babe is. In six years of internet research, we have only ever found one dog that looked identical to him. It tagged the dog as a: Rhodesian Ridgeback, Staffordshire Terrier, Thai Ridgeback, Patterdale Terrier, German Pinscher. So… we stick with “mean muggin’ mutt.”

Nikita: Nikita was Trav’s parent’s dog. His mom instantly fell in love with her crystal blue eyes (how could you not?!), not realizing just how bossy and energetic Huskies can be. I’ll never forget when they first got her we thought she was the perfect puppy. We quickly learned that the quiet, sweet, nondestructive Husky had kennel cough, and as soon as she was cured, earned her first nickname: Big Bits. Although she ate everything that found its way to her mouth (even if that thing was the wall, and it found its way to her mouth as a result of her scooting her crate against it) , she always had this loving nature about her, and always wore the biggest smile.

Bert: My mom’s co-worker was a dog walker for the local Arlington Heights animal shelter, The Buddy Foundation. When Travis got an amazing opportunity to spend summer after graduation interning in Montana’s Glacier National Park (meaning I wouldn’t see him for three months) my parents finally agreed I could get a dog (although still living under their roof). We were having our typical Friday night roomie date night when my mom pulled up Buddy’s website. The instant I saw his glamour shot, I knew little Quinn (now Bert) boy was meant to be mine. I went into Buddy the next day, and he was so full of energy. He playfully bit my arms until I was actively sweating, and unfortunately, even though I would soon be moving out, they would not adopt him to me until the rest of my family came in to meet him.

Nikita: After two and a half years, Trav’s parents realized they could not give her the lifestyle she needed to productively expend her energy and started looking into the option of rehoming her. However, Trav was not about to let her go to a home that wasn’t his. Although we were preparing to move across the country, after six years of long distance, and already having Baby Bert, we agreed that once we had established our new life in Utah, Nikita belonged with us, in the mountains, where she would be able to live her best life.

Bert: I always knew that whenever the time came for me to get my first dog, he would be a rescue, and I would name him Bert (in honor of the late, great Bob Probert, of course). The idea of an animal either spending their whole life mistreated or getting to experience love and then being surrendered to a shelter; or whatever sad, heartbreaking background they came from to end up at a shelter, made me so badly want to love them all.

Nikita: She had been in our lives for three years, we already loved her so much, and there was just no question that we were going to move her out to Utah. Like I said, not a chance my husband was letting that girl go anywhere else.

Bert: As I mentioned, my first encounter with Quinn was less than ideal. However, there was just something about this rambunctious little mutt that completely enamored me. Although he nibbled my arms to the point I couldn’t even talk to the shelter staff without sweating, every so often he would stop and gently lick my face. They wouldn’t give him to me that day (Saturday), and the next day they were open for adoptions was the following Tuesday. I had no way of knowing if he’d still be there by then. However, I went out and bought a name tag, collar, bed, and toys. I felt it in my bones, little Quinn boy was meant to be my Bert. 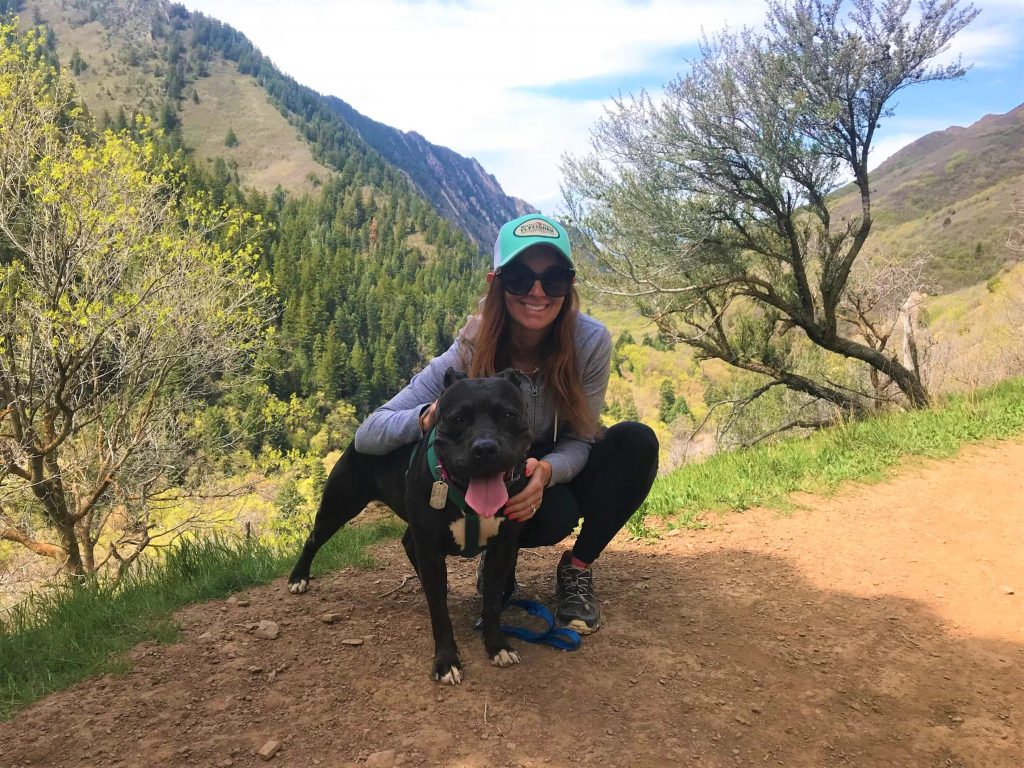 You recently started fostering a third dog, tell us about her!

Holly Dolores! I have wanted a third dog for a while now, and Trav for that same while has said… absolutely not. I began volunteering at the Best Friends Animal Society-Utah Adoption Center in January. It started with cleaning kennels, and then in March was able to attend training to become a dog handler. I have absolutely loved every second of my volunteering, and one night after dog walking AND kennel cleaning in the same day, saw that one of the dogs I had walked that morning was looking for a foster home. I asked what all went into becoming a foster and went home and told my husband I would do ANYTHING to foster sweet Holly.

She has the SWEETEST demeanor and loves to demand belly rubs and give kisses (we call them facials). Long story short, Holly got adopted the day we planned to introduce her to Bert and Nikita, but her adopter never came back for her. It was then, that I again knew she was meant to be a part of our family.

Holly has a lot of quirks, and needed a lot of work with her social manners, but is hands down the most loving, gentle dog we have ever met. She quickly became a “fo” (foster,duh) dad’s girl. At five o’clock every night, she jumps up on the couch and watches out the window until he comes home. At first, her “fo” brother and sister were incredibly reluctant to have her as a house guest but have since come to love her just as much as we do.

The other day, I caught her giving Bert a full maternal cleaning, and although staring at me with eyes that said “Mom, help!”, he let her. Nikita, who barely tolerates affection from Trav and me, allows Holly to give her kisses all day long. Learning about Holly, and how to most productively foster her to become the best girl, with the best chance to find an amazing family, has been an exciting and extremely gratifying challenge. Every time she makes even the slightest bit of progress, we are reminded how lucky we are to have been given the opportunity to be a part of what has easily been the most rewarding experience of our lives.

For more information about Holly or to inquire about adopting her, click here.

I think the most important thing is realizing the extent to which you have to have an open heart, an open mind, and a lot of patience. The reality is, more often than not, you will never know the history and background of the dog you rescue or foster. This unknown can come with a considerable learning curve. What are their likes, their dislikes, their fears, their triggers, their quirks?  Unlike having a dog from birth, you are continually learning about the self your rescue or foster has already developed, and it is not always easy.

Not to mention, the pain and suffering they may have experienced in their previous lives will often require your extra attention, positive reinforcement, and TLC. As I said and will repeat a million times, the risk is worth the reward. There truly is no better feeling in the world than watching a broken or unsure dog heal, start to become comfortable, show signs of feeling safe, and let their guard down, all because you took a chance on loving them.

The biggest lesson we have learned, is that every single dog is different. No two dogs are the same, which makes being a dog parent that much more fun. Most positive breed stereotypes are true, and most negative ones are not. Although having a dog is a massive commitment, every dog just wants to be loved, fed, and exercised, it is really that simple. 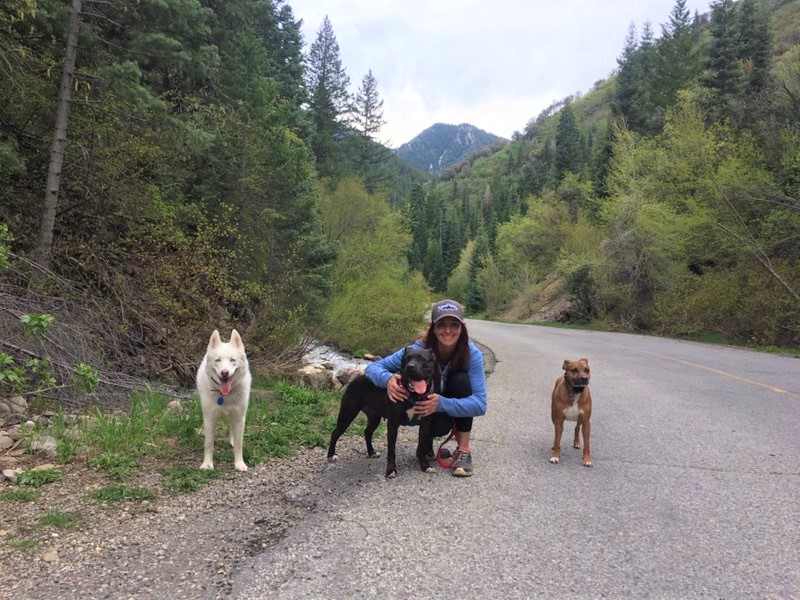 Nikita: The grossest, most overused tennis ball I can find.

Nikita: Pretending I am deaf until I hear you open the treat drawer.

Bert: I am a closet parkour ninja, I love to run and jump off rocks when we are exploring in the desert.

Nikita: Barking in your face at 5 am when I am ready to start the day before you are.

Bert: Barking uncontrollably at our mailman, Bob, even though he comes every day and mom tells me he’s not a bad guy.

Holly: Getting my drool on the ceiling even though on all fours I am only two feet tall

Holly: I’ve never seen a squirrel in front of fo mom and dad but am willing to bet I’d love chasing them as much as I do tennis balls!

All three: Galivanting around the mountains and snuggled up in bed with mom and dad after a long day. Five’s company is how the saying goes, right?!

All three: We follow them around the house until we bully them into giving us treats for no reason, and also when we don’t listen.

I love that Ashley and Travis have brought Holly into their home. I am obsessed with the little furry family they’ve built. They are truly some of the coolest paw parents and their pups are some of the luckiest. I’m in awe of their adventurous spirit and go-getter attitude.

Thanks for stopping by, be sure to check in next week for another Rescue Confessions!

Any guesses to what breeds @vardi_party is!? Answe

Medjool AKA Juju, the pup who has it all. Want to

Jane has been looking for her forever home for 4 y

Chicago Rescue Days begins tomorrow and we need yo

Batman and Robin are a father/son senior pair look

Here are my five most memorable fosters to celebra