Happy Friday friends! I’ve have a great week full of inspiring people and events. I’m so blown away and thankful for all the support so far with my birthday campaign. If you haven’t yet, please consider donating or sharing so we can buy a bed for every dog at Chicago Animal Care and Control! I’ll love you (and so will the pups) forever. I’ve been talking a lot about dogs lately, but today’s Rescue Confessions is one of my favorite feline friends… Bosworth!

Bosworth (aka oddboz) is the prettiest kitty who I came to know through ALIVE Rescue. He’s a strikingly handsome white cat with mesmerizing eyes. Check out his story below and how he came to be the oddest Boz in the 312. 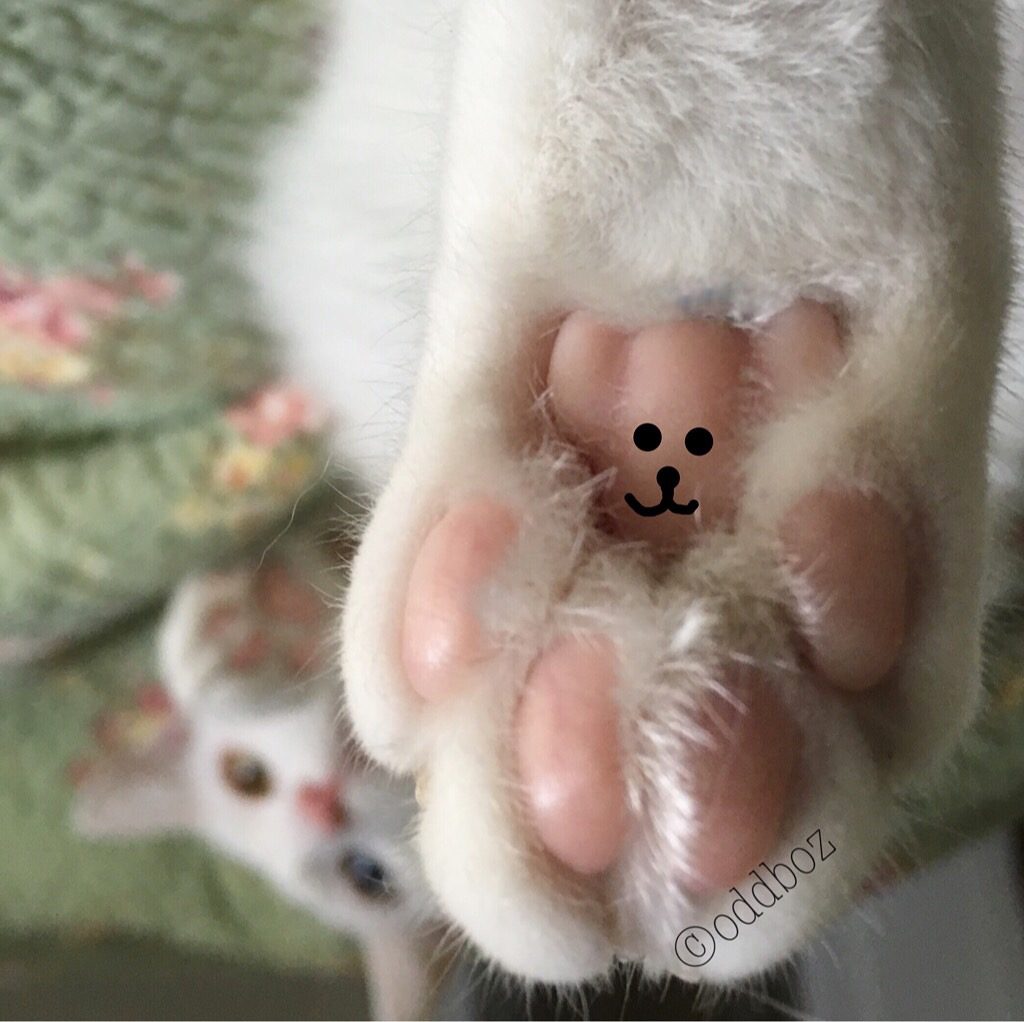 Funny enough, while Bosworth is technically his name, I can’t really ever remember referring to him as Bosworth. I could spend a day listing all of his nicknames, but mainly I call him Boz, Bob, Bop-Bop, Boppers, Littles, Littleman, Manly, Handsome and Hannerson.

Boz is between 4-5 years old. We celebrate his birthday on August 20, which is his adoptaversary.

Boz was a stray but people have told me he has the appearance of a Khanomanee and Turkish Van cat. I usually refer to him as a rare White Shedding Machine breed. I feel it is the most accurate. He also has heterochromia iridum, which is a genetic condition causing the iris of the eyes to be different colors. One of his eyes is blue and the other is an amber color. While some animals with it can also be completely deaf or deaf on the blue eyed side, Boz is not deaf. He can hear a treat bag opening three rooms away.

Over the Fourth of July weekend in 2015, I found myself celebrating, as we do, by browsing Facebook. As I scrolled, I came across a post from an old friend from high school. She had been volunteering for a small Chicago shelter called Alive Rescue. On the days she volunteered, her page would be flooded with pictures of adorable and adoptable dogs, but on this day, I noticed a picture of a cat! He was a pretty white cat, sporting two different colored eyes! I replied to her post, mentioning how much I liked that sweet white kitty. She then said that the white kitty needed a home.

Not in MY home, I thought to myself. I already had an 18-year-old cat and while the white kitty was gorgeous, I wear far too much black to allow a white cat into my home. Nope, we were not in the market to adopt.

So, the next day I found myself at Alive Rescue, asking to see Coleslaw. Yes. That was his name.

I met ‘Slaw in a small room, where he sniffed around, only pausing long enough to deposit clumps of white hair upon my black pants. Darn it. I was going to adopt this little guy and nothing I owned would ever be free of fur again.

The newly named Bosworth came home in August 2015. Little was known of his previous life, other than he was about a year old and was a stray. It took some time for him to adjust to life “on the inside” and he was very timid and afraid. I remember the first time he curled up by my side and fell asleep, I was so excited! I whipped out my phone to take pictures and promptly dropped it right on him. It took a bit longer for him to realize that despite my clumsiness, we could be friends.

I feel that adoption through a reputable rescue was the only option for me. Even though I had just begun to consider adding to my pet family, I knew I wanted to adopt a young adult cat versus a kitten. I felt kittens get adopted quicker than adult cats and it was important to me to open my heart and home to an adult rescue. When I met Boz and saw how well he was cared for by his rescue, I knew this was going to happen.

I never expected to adopt a white cat. I had a black cat and thought I would adopt another one eventually. When I met Boz I saw how scared and timid he appeared but I saw a mischievous little spark and at that moment I knew when this little man felt safe and loved, he was going to blossom into an amazing dude. I wanted to help him become that guy…White fur and all!

I visited Boz several times before his adoption. It is important to get to know them, but my biggest piece of advice is to know that the pet you bring home has likely been scared and maybe even traumatized. They don’t become settled immediately. It took Boz several months to settle in. I advise keeping a newly adopted cat in a small space with their food and litter box and allow them to get comfortable before giving access to the whole house. I also think allowing them to hide under the bed and adjust in their own terms is critical. They gain their confidence on their own schedule and you have to be willing to allow that process to happen without frustration with your pet. There are several brands of diffusers which emit a pheromone which is supposed to help reduce stress for both cats and dogs.

Boz has a collection of artwork featuring himself. He is so conceited.

I also can’t say enough about going through a reputable rescue/shelter.  I was lucky enough to find Boz at Alive Rescue.

Alive Rescue is a small rescue with a huge heart. They believe every animal has the right to a well-balanced, socialized, and fulfilled life. They take on the responsibility to save, rehabilitate and place abandoned, abused and stray animals. Alive provides medical, behavioral and physical support for animals despite their age, health, and/or breed. They have a specific program called Introvert For Life, which takes into account the unique needs of shy and introverted animals. Often these animals are more challenging to house and they provide the additional training and care to make it possible. ALIVE Rescue promotes sustainable living and caregiving within the communities by building awareness, appreciation and respect for all animals and the environment.

Even after your pet comes home, these organizations need support to continue doing their amazing work.

The Human’s hair ties and glitter balls are my favorite. I also really like catnip kicker toys and anything with feathers. 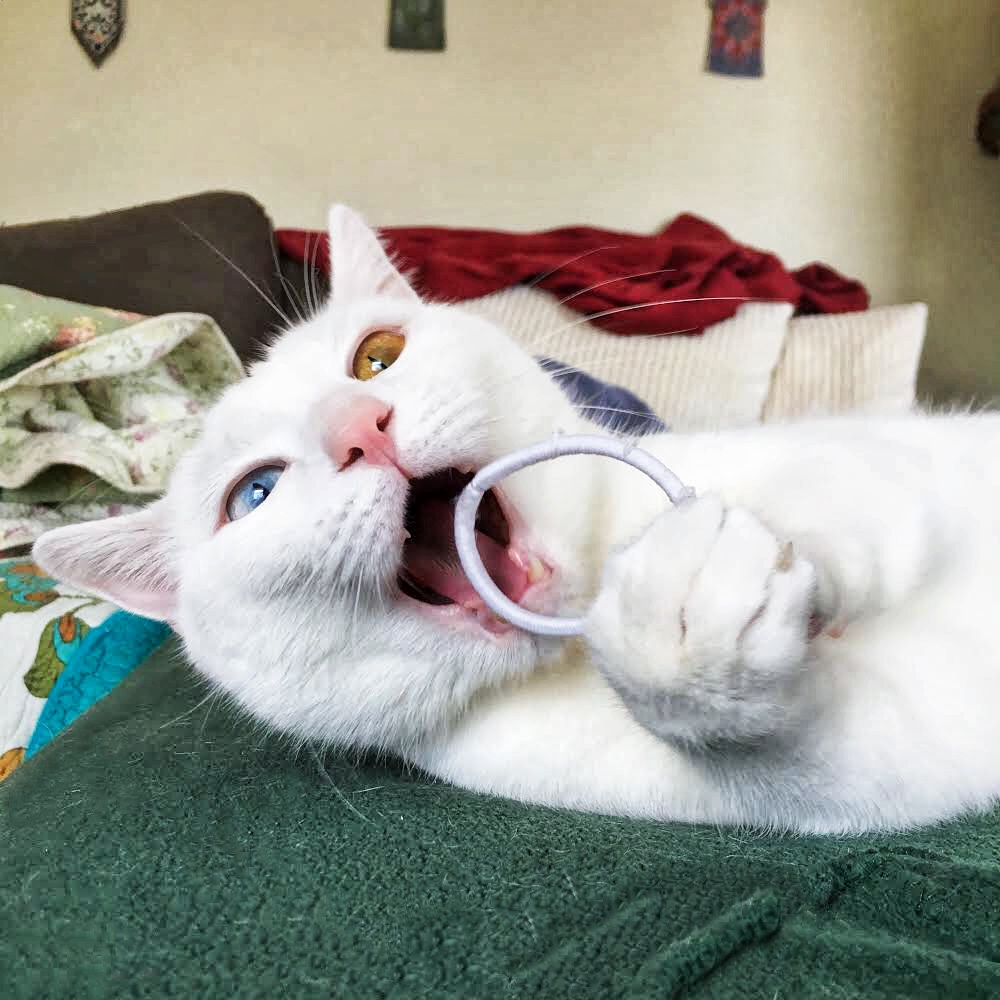 I play a mean game of fetch. I will drop hair ties or my ball in front of the Human and spend an long as an hour fetching it without losing interest. She has also recently taught me to sit on command. I do it most of the time but we still have some work to do.

I enjoy drowning my toys in my water bowl. Sometimes I like to remove them and put them in my human’s shoes or leave them soaking on the carpet for her to step on.

Plastic! Much to my human’s chagrin, I love chewing on plastic bags and the shower curtain liner. If there is plastic or tape anywhere in the room, I will find it and bite it.

Squirrels, but birds over squirrels. I love anything feathered…except 80s hair.

Laser pointers! I can chase that red dot for hours! I love catnip too but it makes me sleepy instead of energetic.

My Catball cat bed.  I love curling up for a nap in my little, safe ball of comfort. It is the best thing the Human has ever gotten for me. I also love laying on her lap, but only when she is was about to get up to use the bathroom or get a drink.

The Human is sitting on the couch or sleeping and suddenly hears the sound of me chewing the shower curtain in the bathroom.

I won’t wear clothes or even a collar. I prefer being a nudist cat and showing off my body. 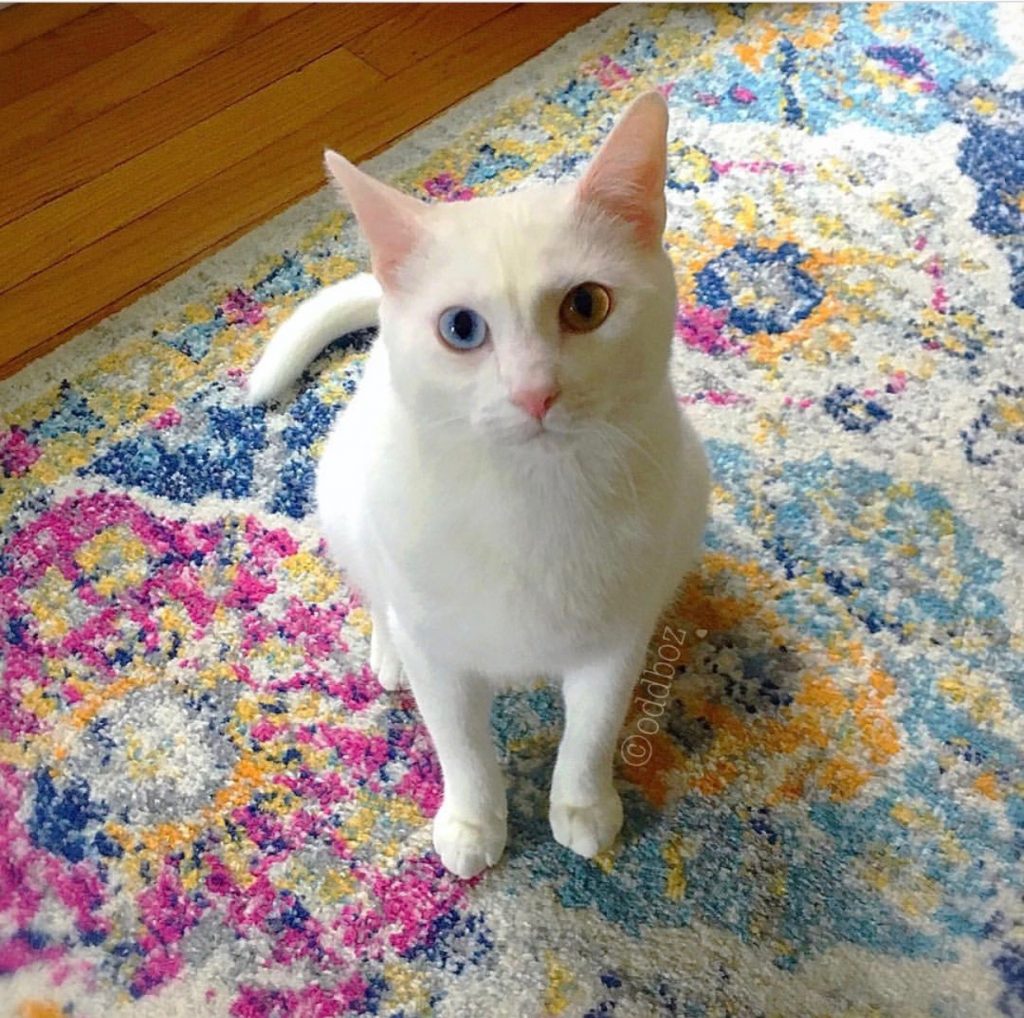 Is anyone cracking up as much as I am? Boz is one funny kitty. (I assume he typed this all up himself obviously). I love what Jackie said about continuing to support the rescue you adopted from after the adoption. They rely on their adoptive community to continue to do amazing work so support your local rescue friends! Be sure to keep up with all of Boz’ ridiculous antics over on Instagram!

Have a fantastic weekend and I’ll see you back here next week!

Any guesses to what breeds @vardi_party is!? Answe

Medjool AKA Juju, the pup who has it all. Want to

Jane has been looking for her forever home for 4 y

Chicago Rescue Days begins tomorrow and we need yo

Batman and Robin are a father/son senior pair look

Here are my five most memorable fosters to celebra