the hardest part about fostering kittens 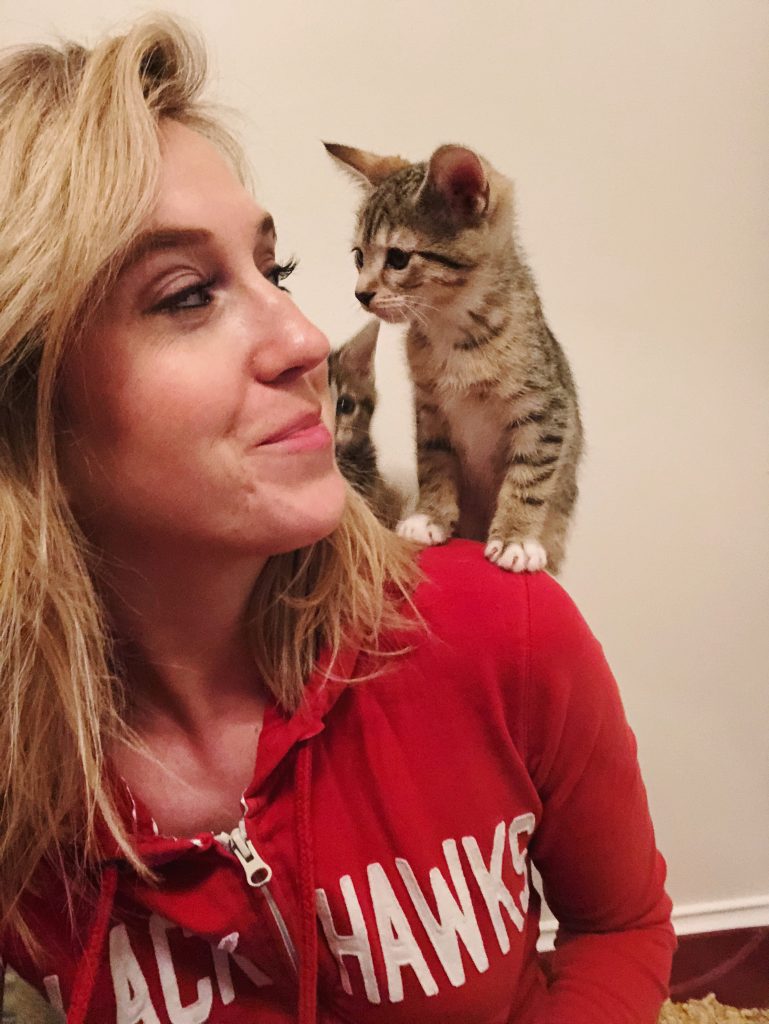 I hate to write this post on a Friday because, well, it’s sort of a bummer. At the same time, I’m finally ready to talk about my latest fostering experience and all the emotions that came with it.

When I talk to people about fostering, they always say they could never do it because they would get too attached. They’re afraid of ever having to say goodbye. Before I got into fostering, it was my biggest fear too. I was worried I would be heartbroken to let them go, I mean, it’s the reason why I started fostering kittens and not dogs. I always considered myself a dog person so I figured I could foster kittens and then easily say goodbye to them. I’d never become a cat lady. El oh el. Turns out, I was wrong on two fronts. First, I am most certainly a fully certified crazy cat lady. Second, saying goodbye at the end of a foster stay isn’t the hardest part.

There were seven kittens and a mom named Pillow, named for the fact that she was brought into ACS in a pillowcase. A few days after arriving at Anti-Cruelty Society, she gave birth to eight kittens. Seven survived but finding a foster home to take all seven kittens plus Pillow proved difficult. They had been posted for a week on the Foster Candidate page before my husband finally gave me the green light to bring them into our home.

This was my third time fostering kittens and my last go had been five little kittens and a mom. In my head, I thought, what’s the difference between five kittens and seven kittens? Turns out, it’s a real big difference. I’m not sure how, but those kittens pooped all the time. I was constantly scooping their litter boxes, refilling their food and water bowls, socializing, and keeping an eye on all of them. They were a lot of work but they were ridiculously cute. Immediately, I knew I was going to bond with this high maintenance crew.

Fostering kittens will provide you with plenty of laughs. When they’re just learning to explore and figuring out their limbs, they stumble around like tiny drunk cats. It becomes even more hysterical when they begin practicing their hunting moves on each other. The stalking, pouncing, and stunned faces are medicine for even the gloomiest of days. I would FaceTime my parents every night for them to watch all their antics alongside me. 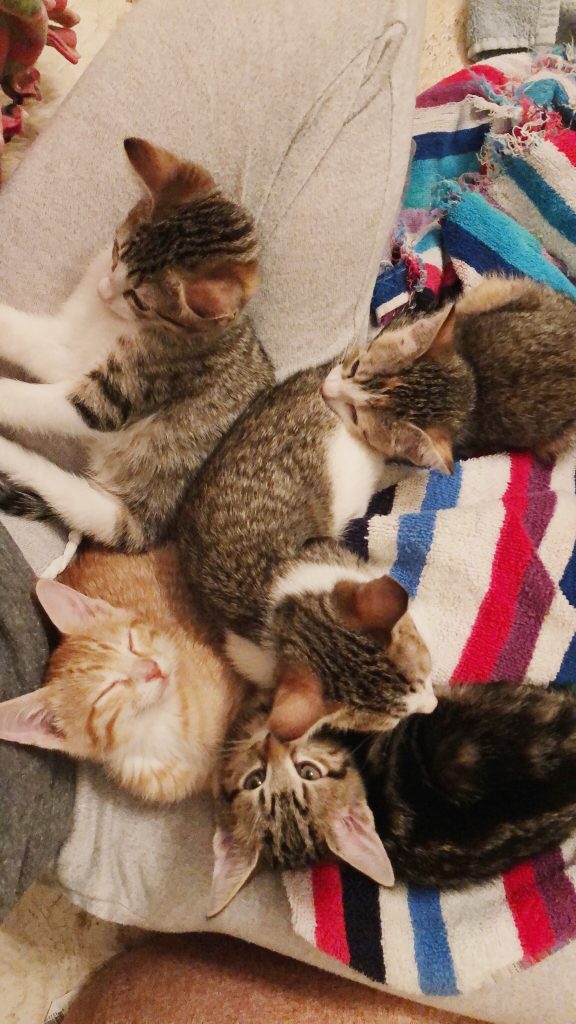 Pillow and her kittens seemed healthy. They passed the eight-week threshold and I was starting to get sad about returning them to Anti-Cruelty Society. Before I could return them though, I experienced absolute heartbreak. One of my favorite kittens, Little Grey, had developed a swollen belly. She was the runt of the litter and the vet on staff wasn’t all too concerned. It’s common for the littlest ones to have potbellies. After keeping an eye on her for a few days, she still didn’t look right. I brought her into Anti-Cruelty where a vet checked her over and sent us home with dewormer. Praying this was as simple as a deworming, I administered meds to all the kittens.

A couple of days later, with her belly still so swollen, I called the vet for the third time. He administered another, more serious dewormer. She was still eating and drinking water, but I could see her energy levels had dropped. I gave her the medicine and snuggled with her for a long time. I put her in a snuggly cat cave and said goodnight. The following morning I found she had passed, her tiny body no longer able to fight. Heartbroken and in shock, I brought her body to Anti-Cruelty Society hoping for answers. 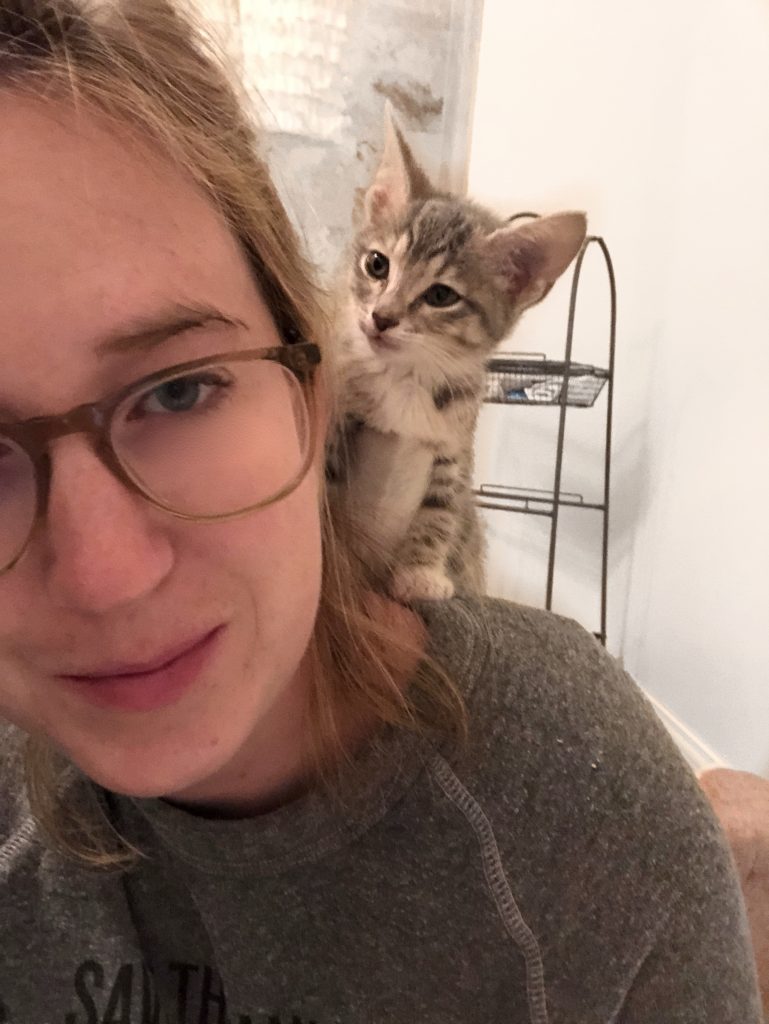 This is the hardest part of fostering. The unknown, the questions, the self-doubt, and the anxiety I dealt with after her passing. Losing her was difficult and what haunted my mind was whether I had done enough. Whether I could have saved her or done something differently. If she was in the care of someone who had fostered many times before, would she have made it? I don’t know these answers and perhaps I’m not supposed to.

Here’s what I do know though. I know that there are thousands kittens born into shelters every year. Many of them won’t get the chance to experience growing up in a home. Their fragile bodies succumb quickly to germs present at even the cleanest shelters. I know that fostering saves lives. I know that I’m doing the best that I can with what I have. I’m giving them a safe, warm, happy, and loving place to grow up and even if it’s only for a short time, I know they were loved.

I returned the rest of the litter to the shelter the following day for their surgeries. Unfortunately, they were too small to undergo surgery so they’re now being observed and putting on weight in the Director’s office. Now, my biggest concern is whether the rest of them will be faced with whatever Little Grey had. I know they are getting lots of love and the care they need, but I just want them safe and sound and happy in their forever homes. Until that happens, I’ll be anxious about their status.

The unique thing about fostering kittens is how fragile they are. They are very vulnerable to sickness and something called fading kitten syndrome. Out of the three litters (17 kittens) I’ve fostered, I’ve lost two kittens. I’m still processing all the emotions that come along with fostering and losing two. Every day gets a little better and the sadness is getting replaced by a new desire to do better and to fight harder for the next ones. 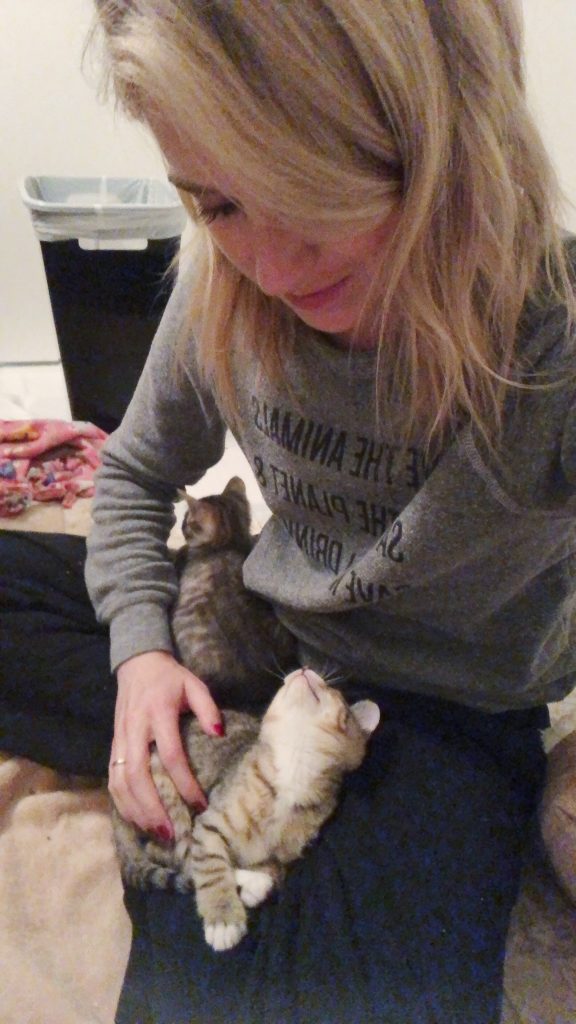 I will not let this experience stop me from fostering again. Yes, it was hard and excruciatingly painful at times, but the good outweighs the bad. The highs easily outnumber the lows and that’s what I’m focusing on right now. I know that if I stop fostering, more kittens will lose their chance at thriving and experiencing love, even if only for a short time.

I want to thank you all for being so extremely supportive and kind. All the texts, messages, and comments really made a difference. I’m thankful to have you on this journey with me as we work together to save lives.

Spread the love
Author: Christine
Filed Under: Anti-Cruelty Society, Blog, Tips for Cats
why I need self-care
How Hurricane Katrina saved animals for years to come

2 thoughts on “the hardest part about fostering kittens”

Two years ago, I met this big floof at @onetailata

Cheese stopped by to help me further explain why I

At the beginning of quarantine (aka forever ago) w